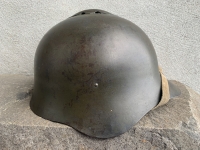 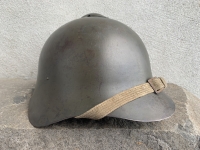 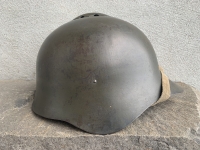 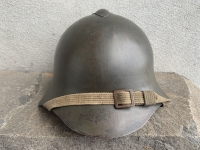 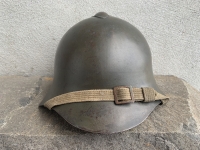 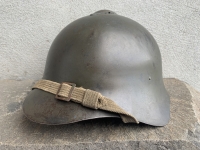 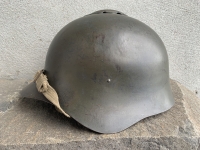 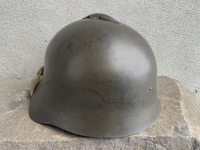 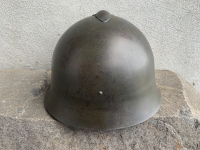 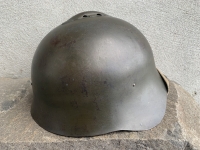 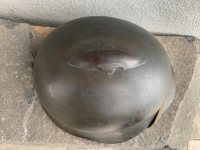 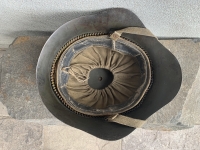 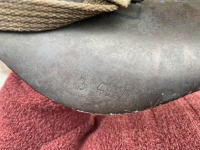 This fine example has nearly 75% of it's original factory moss green paint still in tact with only minor areas of surface bluing but no active rust or pitting anywhere to be found. It's that nice smooth brown stabilized surface rust like you see looking down at an old manhole cover. The original canvass bowl shaped liner is 100% untouched since the late 1930's. One of the nice things about these Russian helmets is that the liner systems were riveted in place and can't be messed with only permanently removed or left alone. Historians tell us that a lot of these helmets when used in winter conditions had the liners yanked out as to allow for a soft Ushanka rabbit fur hat to be worn underneath to prevent from freezing to death. I would have done the exact same thing. The canvass chinstrap is fully in tact and has never been altered or shortened and is permanently riveted to the chinstrap bales. The Russian helmet came in 4 sizes and this one is a nice size 3 large that fits my head and I'm a German size 66/59. The side lot number is 3-4987 and the 3 is obviously the size and 4987 must be a quality control lot number similar to what the Germans used. I know it's tempting to pay $5 and buy a red star paper template to decorate up the front but from the hundreds of original photos of Russian soldiers I've seen very few actually had that red commie star. You see it mostly in large parade gatherings but rarely in the field. If you look at enough photos you might conclude that as a Russian solider when in public view i.e. parade squares etc. yes go with the red star but in front line combat conditions get rid of the damn thing!!! Rub it away with some diesel or just repaint it again crudely by horse hair brush.

This entry was posted in Original, Other. Bookmark the permalink.