BBACKGROUND: The first "modern" steel helmets were introduced by the French army in early 1915 and were shortly followed by the British army later that year. With plans on the drawing board, experimental helmets in the field, ("Gaede" helmet), and some captured French and British helmets the German army began tests for their own steel helmet at the Kummersdorf Proving Grounds in November, and in the field in December 1915. An acceptable pattern was developed and approved and production began at Eisen-und Hüttenwerke, AG Thale/Harz, in the spring of 1916. These first modern M16 helmets evolved into the M18 helmets by the end of WWI. The M16 and M18 helmets remained in usage through-out the Weimar Reichswehr era and on into the early years of the Third Reich until the development of the smaller, lighter M35 style helmet in June 1935. In an effort to reduced construction time and labor costs minor modifications were introduced in March 1940 resulting in the M40 helmet. Further construction modifications were undertaken in August 1942 resulting in the M42 helmet. Originally the Third Reich national tri-color helmet decal was introduced on March 14TH 1933 for wear on the left side of the helmet to replace the Reichswehr era state shield insignia. Regulations of February 17TH 1934 introduced the Wehrmacht eagle decal and the national tri-color decal was shifted to the right side of the helmet with the Wehrmacht eagle decal positioned on the left hand side. Regulations of March 21ST 1940 dictated that the national tri-color decal was to be removed from all helmets and further regulations of August 28TH 1943 abolished the Wehrmacht eagle decal and dictated that it was also to be removed from all helmets although the directives were not completely adhered to.

PHYSICAL DESCRIPTION: The stamped, sheet steel construction helmet with nearly all of its original smooth apple green enamel paint. The left side of the helmet has a Wehrmacht eagle shield decal which is retained at a stunning 100%. The right side of the helmet has a national tri-color shield decal which is retained over 99%. All three liner retaining rivets and both inserted ventilation bushings are all intact. The interior of the helmet has a light tan, M31 leather liner with all eight fingers and the original tie string intact. The liner is well marked with a black size ink stamp, "58". The interior reverse neck guard apron is serial/lot number stamped, "3024", and the interior left side apron is stamped with the manufacturers code and size, "SE 66", indicating manufacture by Sächsische Emaillier-und Stanzwerke, AG Lauter, size 66. The rear lot number places the original year of production to 1937 which is further backed up by the fact that the outer non-reenforced aluminum band also bears that same year. The helmet comes complete with it's original aluminum buckle chinstrap no doubt marked but too faded to read. Unbelievably and with great fortune we still have the original soldier's pencil identification markings on the rear skirt. While I am part of the 80's generation who grew up writing in cursive I needed some special help to make out the German translation. So I contacted an old friend of mine an older gentleman out of Western Germany to help me to translate. What he explains made complete sense and also shed some light on why this helmet survived so well during the war years.

The Pencil Marks on the Rear Skirt Explained
Horst "Hello Jesse, the writing means: above the rank stabszahlmeister this is like Hauptmann (Captain) but Not a combattant. Regiment staff for payment and care in the regimental staff. The military location is the Heerstandortverwaltung in Offenburg Black Forest near France. The name of the owner is Peukert. It is in the middle if you have any questions please contact me again. The Stahlhelm is not used in fight therefore it looks so good. It good looking helmet. Best wishes and regards from Rockenhausen, Germany. Your friend Horst have a nice time."

Me: " Thanks Horst I really appreciate that information. I'm going to publish it on my website and to everyone this particular helmet's history. I can't believe the original pencil writing is still inside there like that. What are the chances it would have survived all this time!

Horst: "Hello Jesse good evening. In my opinion the writing is from the war time. It was necessary to write name rank and unit in the Stahlhelm that way there was no swap possible. This helmet was only used to live update for parade because Mr. Peukert had to wear uniform too but he was not in a fight situation therefore the helmet is in such good condition. Maybe at the end of the war he had to fight but not long and hard. Most of the helmets were marked to find out the right one because the sizes were different. I also marked my helmet while I had to absolve my paramilitaric training. I wish you and your family a nice time and much joy with your collection. Best wishes and regards your friend Horst from Rockenhausen, Germany" 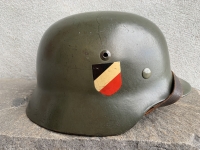 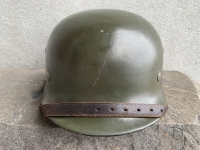 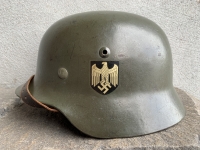 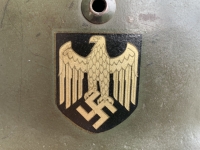 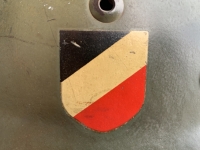 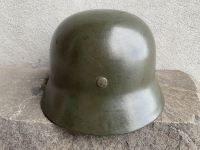 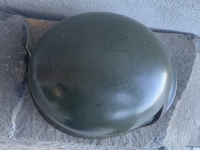 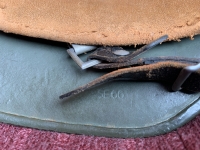 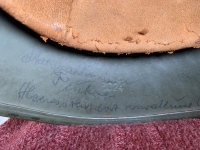 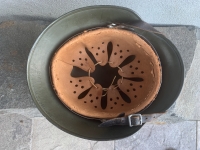 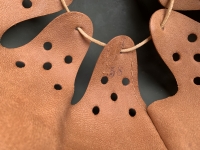 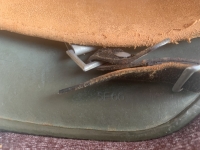 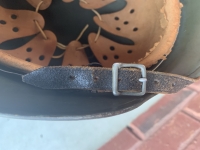 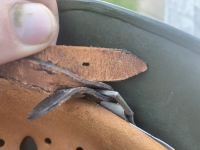 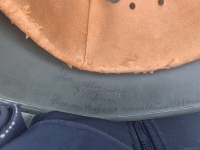 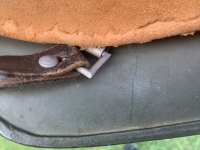 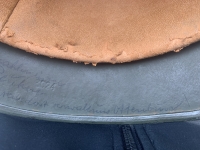 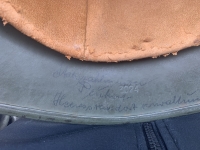 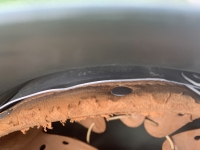 GERMAN HELMET FACTORY PRODUCTION CODES
(Every original German helmet produced from 1935 to 45 had two factory stampings punched into the side and rear or both in the rear one above the other.  The alpha numeric number refers to the factory location and the inside metric circumference in centimeters.  The rear lot number refers to the production run and was used as a quality control measure. The font styles used at each factory were slightly different but highly consistent throughout the war and so fakes or reproductions will either not have these numbers at all or they will use the wrong font style or letter spacing and so are easily identified as post war made.)