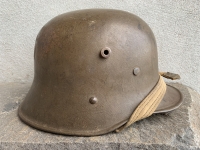 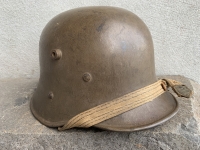 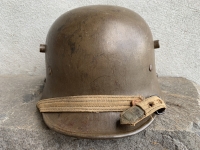 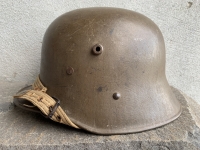 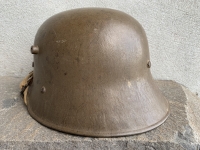 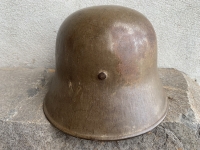 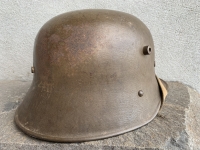 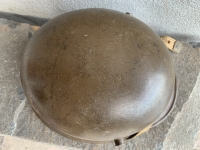 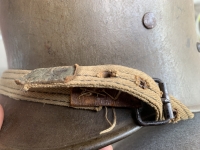 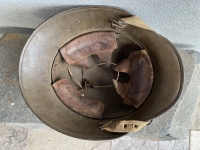 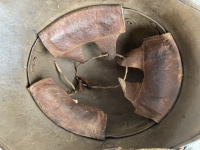 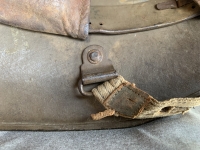 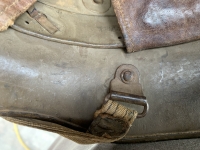 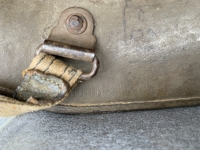 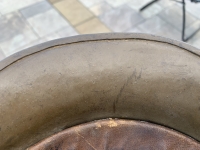 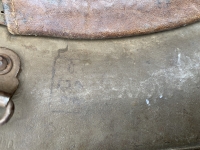 DESCRIPTION
Here is an untouched storage locker find out of southern California. Most likely the dry heat helped to preserve the helmet's overall paint and condition. A wonderfully untouched and all original find with it original liner system and riveted canvass chinstrap means that this helmet was never ever messed with since it first made it way to the battlefield in The typical German M16, 17 and 18 helmets were factory painted in a range of dark olive to apple green to match the fields and wooded areas endemic to their particular topography. Austrian helmets on the other hand where hills and mountains regions are more common went with a more mud like or khaki color of paint that some suggest may be close to the German paint code RAL 8008. Albeit even in that particular RAL code their would have been a range of mud brown hues slightly different from each factory.

The Austrian M17 was almost identical to the German version with the positioning of the chinstrap liner rivets higher up on the shell being the most readily identifiable difference. Unlike the Germans the Austrian pattern helmet are often found without factory stamps and heating lot codes. When the heating lot codes are present it is often on the top of the helmet instead of the inside. While their are 10 known factories responsible for producing Austrian M17 helmets most of the time the factory itself did not stamp on the inside skirt of the helmet unlike the German produced helmets which always did. Fortunately however with this particular example we do actually see a factory code stamped on the inside skirt near where the wearer's left ear would be. Although a bit difficult to read even when I zoom in with my I-phone it basically appears to be something like "BBBB". However after doing some quick research the factory that most resembles this code might be Brüder Gottlieb u. Brauchbar, Brunn located in Brunn-Austria. My best guess is that the stamping actually reads "BGBB". Just pretty awesome that they actually took the time on this one to make the stamping. Their is also a very faint black rubber stamping nearby which is probably some other type of quality control or inspection marking.

Not easy to find untouched Austrian WW1 factory produced helmets in this condition as many if not most were reused during the inter war period or completely stripped down and repainted in the months leading up to WW2. One can only imagine the historical gauntlet this helmet had to run in order to survive. Avoid being damaged during WW1, avoid having a spike plunged into your top crown once captured by the Allies and thrown into a similar pile, then avoid being eaten up by the hungry Wehrmacht re-armament campaign. Then once in the USA it had to avoid being dipped in chrome, bikerized or used for pellet gun practice by all of those kids playing around it since the 1950's. I mean this thing really is a true survivor!!!