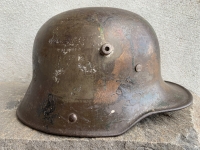 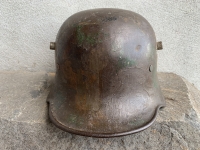 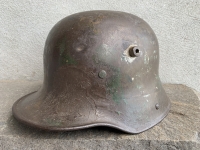 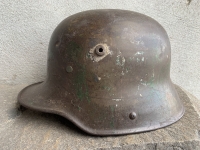 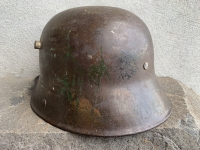 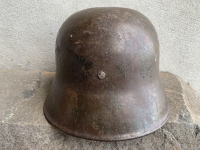 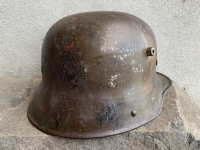 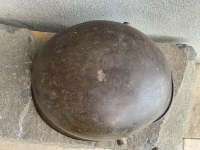 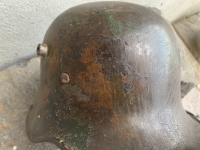 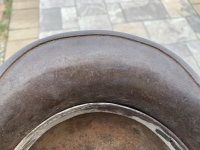 DESCRIPTION
Excellent first world war M17 helmet with period applied geometrical camouflage pattern often referred to as Mimikri. The helmet retains up to 20% of its original finish and its original outer metal liner band. The paint colors that can be seen include dark ochres, forest green and brick red brushed on paint. Certain areas do show some evidence of silver paint at one time but most of that has been removed exposing the original stain glass window camouflage pattern beneath. It is also a nice large size Si66 and a great helmet for that newer collector on a budget.

Author's Notes: Well we all have a good side and a bad side unless you are as perfectly symmetrical as I am - (just kidding) but when I was younger I was accused often of being a "real ham". For this particular M17 helmet it's best side with the most amount of multicolored paint still remaining would definitely be on it's right hand side. Since the M16 and M17 helmets are basically identical except for the liner system I am referring to this one as an M17 only because the original liner band is still in tact meaning that it would have been issued with a metal banded liner system whereas the M16 would have been all leather. A real bargain and priced to sell as an 85% camo painted version would command something in the neighborhood of $1500 at todays prices. In the past three years WW1 German geometric camo helmets have really shot up in value as European buyers eager to reclaim their much less controversial history snatch them up wherever and whenever they find them.