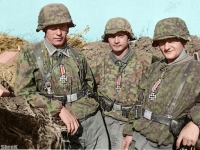 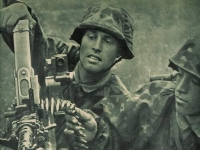 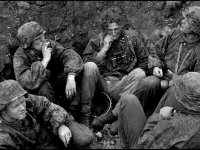 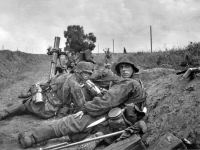 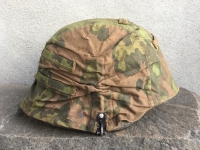 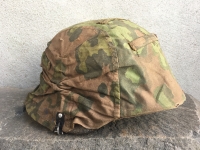 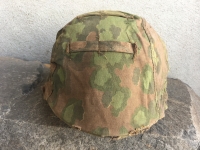 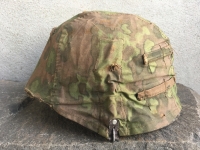 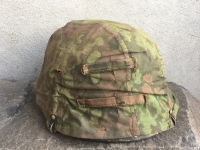 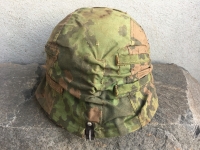 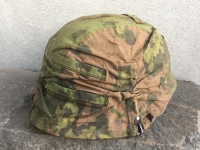 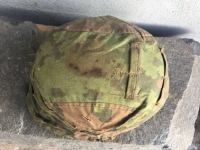 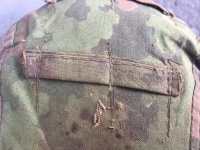 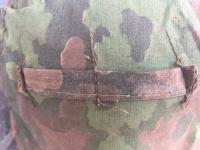 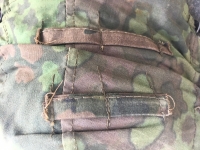 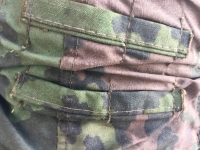 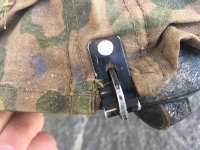 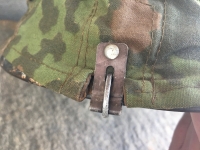 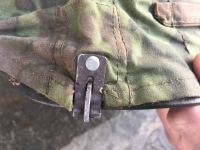 BACKGROUND
The development of SS camouflage items was initiated by Reichsführer-SS Heinrich Himmler in 1935 when he tasked the Reichsführung-SS, (National Leadership of the SS), to begin research of new camouflage patterns and garments for use by the fledgling SS-VT, SS-Verfugüngstruppe, (SS-Special Purpose Troops). In late 1936 and early 1937 the first SS camouflage garments were issued to personnel of the SS-VT Standarte Deutschland for field testing and evaluation. The first items evaluated were the Quarter shelters/ponchos, followed by steel helmet covers, face masks and smocks. As the war continued various other clothing items were produced in the assorted camouflage patterns. Originally the camouflage patterns were all produced in the time consuming manual screen printing until the development of the machine roller printing in 1940. By the end of the war no fewer than ten assorted camouflage patterns had been developed and used by the SS including the, Oak-leaf "B" camouflage pattern as developed in 1943, and based on the Oak- leaf "A" camouflage pattern. The Oak-leaf "B" pattern was reworked and utilized through to 1945. The very earliest, first pattern camouflage helmet covers had the securing rocker clips hand stitched in place until modifications in 1937 when the hand stitching was replaced with the more practical and less time consuming rivet attachment. After the introduction of the rocker clip rivet attachment the camouflage helmet covers remained unmodified until regulations of mid-1942 when foliage loops were added to the covers. The camouflage helmet covers were issued in three sizes with size "3" indicating large, size "2" indicating medium and size "1" indicating small. While I cannot find such a number on this particular SS cover it may have just never been stamped or possibly washed away over time through rain, wind and snow. These things were worn outside is all types of weather. The dampness kept in against the metal helmet shell I believe possibly explains why so many SS helmets end up more on the rusty side.

DESCRIPTION
Very nice Waffen-SS helmet cover in oak leaf camouflage. A really nice example retaining strong a vivid colors. The entire cover is printed on a cotton linen fabric in the pattern of « Oak Leaf A ». All original camouflage foliage loops are present and factory sewn. All hooks and rockers are intact and functional. Two springs remain tight and still attached. Slight wear and use can be seen in the close-up photographs of the rockers. The helmet is photographed on a size 62 M35 helmet shell but also fits on a 64 as well. Overall condition of the cloth cover is excellent with a handful of small nips, abrasions, and rust spots from storage. Strong and contrasting colors. An example that shows actual use and wear is desirable. An excellent late-war cover.

I do have US vet provenance with this cover and can tell you the name and address that the vet once lived in. This cover was literally found in an attic under some old furniture by the new owner of the house inside of a US army duffle bag at the bottom near a pair of old socks along with some very disturbing photos of rows and rows of dead POWs.

$6500 SOLD - A very worthy Austrian buyer. His grandfather served in the elite Germania division from Linz, Austria. He bought this cover as a tribute to him.