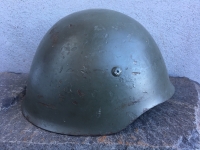 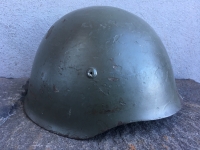 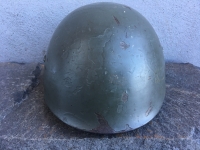 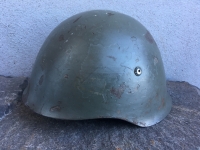 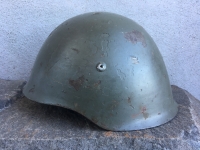 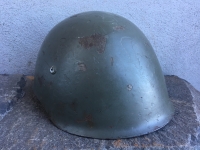 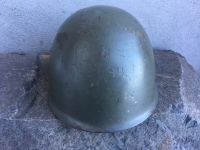 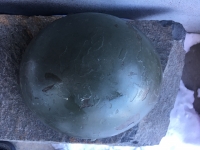 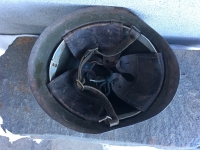 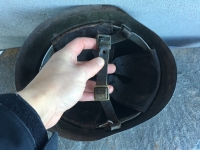 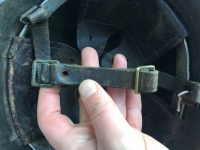 DESCRIPTION
Well since I am Helmets of War I thought it would be nice to include a few non-Germanic nations for a change. Here is one such find a WW2 M1940 Portuguese army helmet with full liner and original chinstrap still in tact.

What did the Portuguese army do in WW2? I have no idea but I'm sure someone out there does and would love to add this to their WW2 collection.

I love the look of this helmet as you literally look like a frog when you put it on. I'm a German size 66/59 and this thing fits me perfectly.

I call it the Kermit the Frog helmet. Only $150 will hop it right over to your side of the pond.

Some Background
This is an original WWII Portuguese model 40 helmet!!  Very nice piece, has a super nice original leather liner too!! Until the early 1940s, the standard combat helmet of the Portuguese Army was the Brodie helmet, adopted during World War I, two versions of which were in use, referred in Portuguese service as the M1916 and the M1917.

In the late 1930s, it was decided to replace the M1916 and M1917 by a new modern helmet. Several foreign helmets were tested and finally a Portuguese design was adopted in 1940, being designated M1940. The M1940 was allegedly inspired in the design of helmets used by the Portuguese soldiers of the 15th century. It was made of steel and manufactured by the Fábrica de Braço de Prata (military factory of Braço de Prata) in Lisbon.