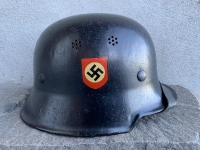 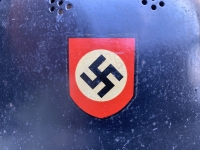 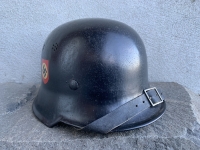 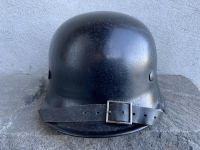 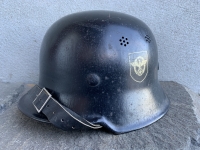 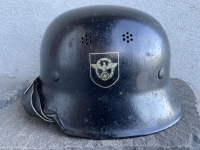 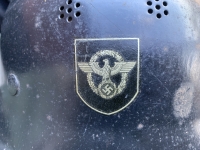 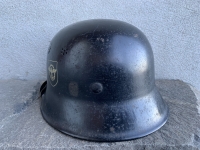 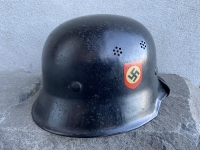 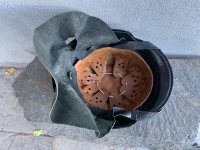 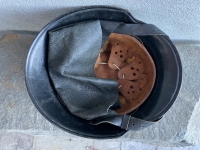 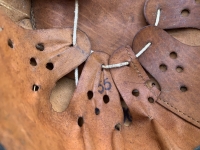 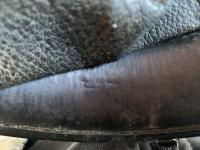 BACKGROUND
The Ordnungspolizei encompassed virtually all of Nazi Germany's law-enforcement and emergency response organisations, including fire brigades, coast guard, and civil defence. In the prewar period, Heinrich Himmler, head of the SS, and Kurt Daluege, chief of the Order Police, cooperated in transforming the police force of the Weimar Republic into militarised formations ready to serve the regime's aims of conquest and racial annihilation. Police troops were first formed into battalion-sized formations for the invasion of Poland, where they were deployed for security and policing purposes, also taking part in executions and mass deportations.[3] During World War II, the force had the task of policing the civilian population of the occupied and colonised countries beginning in spring 1940.[4] Orpo's activities escalated to genocide with the invasion of the Soviet Union, Operation Barbarossa. Twenty-three Order Police battalions, formed into independent regiments or attached to Wehrmacht security divisions and Einsatzgruppen, perpetrated mass-murder in the Holocaust and were responsible for widespread crimes against humanity and genocide targeting the civilian population.

DESCRIPTION
Ordnungspolizei (Order Police) M34 Stahlhelm. This is a very well-preserved Ordnungspolizei Civil Police M34 steel helmet, constructed of a black-painted magnetic metal shell. The helmet is flanked on each side by dual clusters of seven ventilation holes, with decals applied in between. The right decal consists of a NSDAP party emblem in the form of a red shield bearing a white disc overlaid by a black mobile swastika, measuring 32 mm (w) x 42 mm (h). The left decal consists of a black shield overlaid by an Ordnungspolizei eagle clutching a wreathed mobile swastika, on top of an oval oak wreath, also measuring 32 mm (w) x 42 mm (h). Four rivets are evenly distributed around the circumference of the helmet, securing in place the interior fixtures The rim of the helmet is fully crimped, facilitating a smooth edge. The interior features four double-overlaid cork patches, held in place by the aforementioned rivets, with four blackened pebbled leather straps emanating from the patches. Affixed to the cork is a tan-coloured leather liner with nine fingers, each of which is stamped at the top with a hole through which is looped a drawstring with blackened magnetic metal end pieces. The forehead of the liner bears multiple rows of ventilation holes. The crown has a padded tan-coloured leather cushion, providing added protection for the wearer’s head. The liner has a blackened leather chinstrap, adjustable with a magnetic metal buckle. The shell is stamped on the interior with “D.R.P. Hale”, with a size stamp of “55. Pretty much the finest example I've ever had in my hands with nearly 100% decal retention on both sides. The helmet is in an overall in extremely fine condition with it's original leather neck flap still in tact and functional.

This entry was posted in Original, SS-Police. Bookmark the permalink.