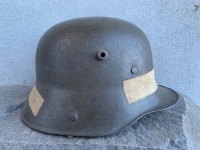 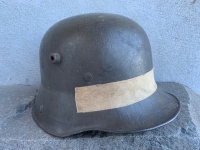 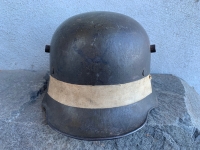 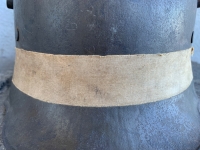 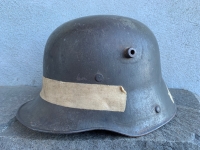 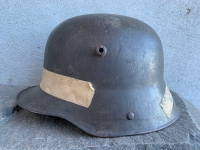 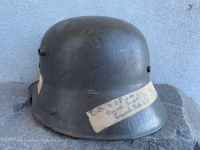 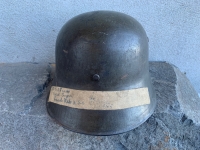 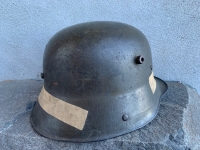 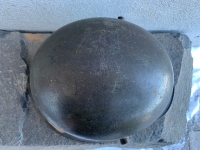 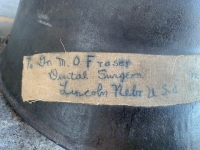 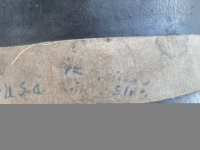 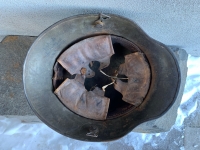 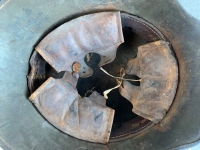 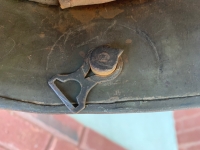 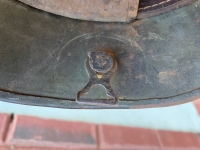 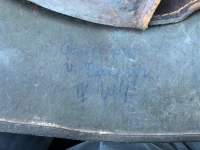 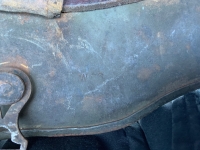 This your typical front line every day fighting man's German helmet from WW1. It is an M16 model with a leather liner in brown so it was originally tanned with vegetable dye as opposed to the white chromium tan which was used later in the war and create a white finish on the leather. A nice large size 66 and stamped W66 for Hermann Weissenburger & Co., Stuttgart-Canstatt. The original dark green smooth factory paint is still most present on both the inside outside of the shell as are the two original chinstrap bales. As we can see the helmet was sent back home in 1918 via the US postal service and sent back a friend in Lincoln, NE. Based on other surviving examples the two stamps on the front would have been two 12 cent Washington stamps which have simply fallen off over time but could be replaced by a few dollars. The tape on the front and back is a US 1918 military postal tape made of a sticky fabric material and is also seen on similar surviving examples. Tempting to just peel it off but then we would be ruining some 1918 US history trying to get back to 1916 German history. As with anything WW1 original it's always best to leave these things as we find them for future generations to enjoy and research.

VET PROVENANCE BACKGROUND
On Sat, 27 Nov 2021 at 12:13, Female Seller wrote:
Hello  Jesse,
It is an interesting story about the helmet. My grandfather was Walter KENDLE (ace different spelling of Kendall that goes back a couple hundred years ) He and his two brothers enlisted in World War I, he was 18,  they were 17 and 16 and falsified their records so they could go. Thankfully all of them returned. Grandpa sent this helmet to a friend of his in the US.

He was in the bugle corps which also was the medic/corpse carrying department. He saw horrible things which of course changed his life. He wanted to go into medicine but didn’t think he could handle all of the blood, so he  chose dentistry, which led to him going into World War II as a captain, then major, in charge of the Western division dental command, stationed in Skagway, Alaska.

Back to his World War I experience, I ran across his French to English translation book when I was about 15. He told me the story of getting pneumonia due to the mustard gas. The Regiment left him behind thinking he was going to die. A French family found him, put him up in their barn, gave him French onion soup and saved his life. He claimed the French onion soup was the antidote. I treasure that story and the little book that I still have. I mailing the helmet today by UPS. I will appreciate you letting me know when you get it. And tell your wife Debby hello for me, lol.

DebraHi Jesse!
My grandfather was always from Nebraska, but was born around Syracuse, Nebraska. Dr Fraser was a family friend and later a partner in dentistry.  He was kind of a mentor to get my grandfather into dentistry when he came back from WWI.  I didn't know him as he died when I was young.