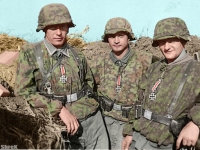 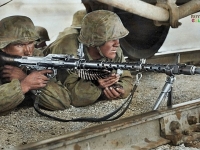 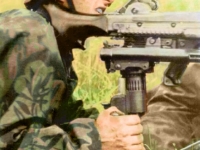 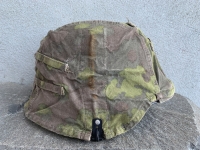 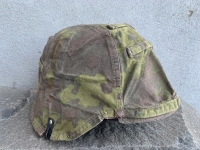 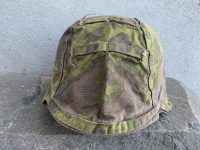 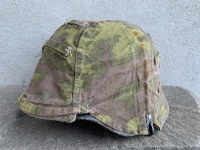 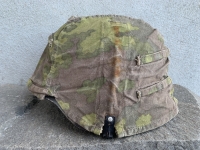 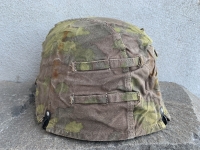 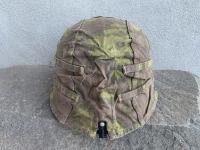 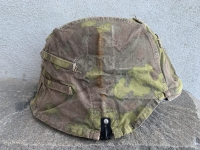 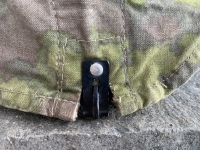 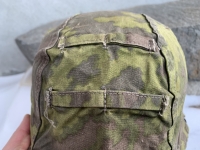 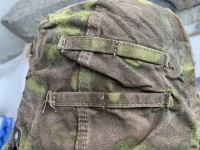 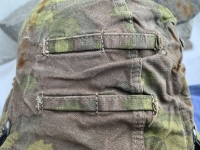 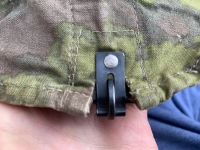 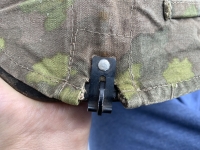 BACKGROUND: The development of SS camouflage items was initiated by Reichsführer-SS Heinrich Himmler in 1935 when he tasked the Reichsführung-SS, (National Leadership of the SS), to begin research of new camouflage patterns and garments for use by the fledgling SS-VT, SS-Verfugüngstruppe, (SS-Special Purpose Troops). In late 1936 and early 1937 the first SS camouflage garments were issued to personnel of the SS-VT Standarte Deutschland for field testing and evaluation. The first items evaluated were the Quarter shelters/ponchos, followed by steel helmet covers, face masks and smocks. As the war continued various other clothing items were produced in the assorted camouflage patterns. Originally the camouflage patterns were all produced in the time consuming manual screen printing until the development of the machine roller printing in 1940. By the end of the war no fewer then ten assorted camouflage patterns had been developed and used by the SS including the, Oak-leaf "B" camouflage pattern as developed in 1943, and based on the Oak- leaf "A" camouflage pattern. The Oak-leaf "B" pattern was reworked and utilized through to 1945. The very earliest, first pattern camouflage helmet covers had the securing rocker clips handstitched in place until modifications in 1937 when the hand stitching was replaced with the more practical and less time consuming rivet attachment. After the introduction of the rocker clip rivet attachment the camouflage helmet covers remained unmodified until regulations of mid-1942 when foliage loops were added to the covers. The camouflage helmet covers were issued in three sizes with size "3" indicating large, size "2" indicating medium and size "1" indicating small. Of Note: The helmet shells were issued in six sizes with sizes 60 and 62, being small, sizes 64 and 66 being medium and sizes 68 and 70 being large.

PHYSICAL DESCRIPTION: Second pattern, (Circa 1942-1945),three panel, water resistant, cotton duck construction, helmet cover with the machine roller printed, reversible, spring/autumn, Oak-Leaf "B", repeating splotch camouflage pattern, riveted on rocker clips and foliage loops. The helmet cover is reversible with a repeating splotch pattern and has distinctly different colorations to the summer and autumn sides, with the summer side being in shades of browns, tans and greens and the autumn side in shades of browns and orange/tan. The cover consists of three, machine sewn, panels with a vertical panel to each side and a large, central, rectangular panel, designed to fit the contours of the helmet. The bottom edge of cover has three tooled and crimped steel, securing rocker clips with a dome headed, retaining rivet to each. The rocker clips are situated with one to each side panel and one to the reverse center. Each of the rocker clips are also attached to a vertical, tunnel looped, steel spring. The bottom edges of the springs are riveted to the rocker clips while the top edges of the springs are stitched directly to the cover. The vertical, tunnel looped, springs provided the necessary tension to secure the cover to the helmet and all three are still quite taunt. The forward edge of the cover has a dual-ply, overlapping lip, with rows of reinforcement stitching to the forward edge designed to fit snugly over the helmets forward visor. The cover also has three sets of dual, horizontal, foliage loops to both the summer and autumn camouflage sides, with one set to each side panel and the other set near the front of the central panel. Each of the foliage loops has a central stitched seam resulting in total of twelve individual loops to attach foliage to each camouflage side. Looks to be a size small 1 as we have it photographed on an M40 shell size Q62 helmet.