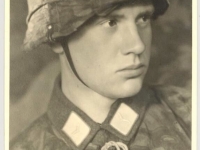 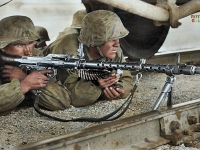 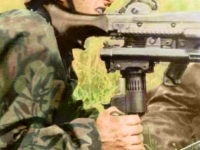 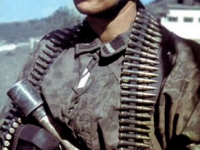 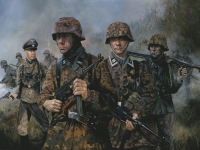 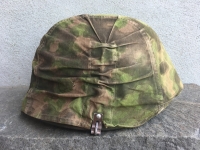 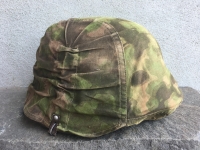 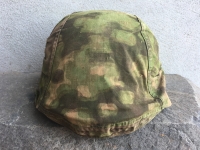 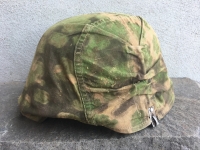 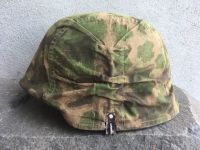 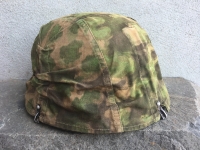 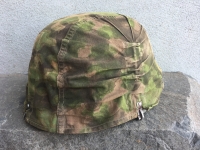 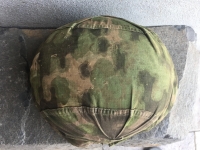 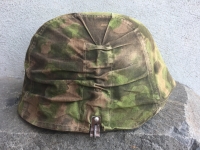 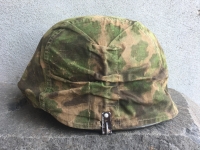 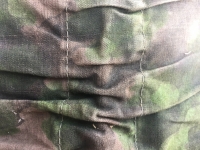 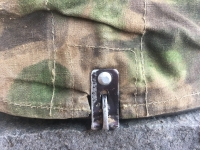 DESCRIPTION
Very rare Waffen-SS combat helmet cover in Blurred Edge pattern. Early first type construction without foliage loops. Cover material is printed on both sides in Spring and Fall colors. Retains all original spring loaded rocker clips. Colors are vibrant on both sides. Immaculate condition with virtually no tears, rips or holes whatsoever. This is a large size 3 and can fit size 66 and 68 helmets. The helmet used to display the cover is a large M35 ET66. Textbook construction and correct sewing for a factory made piece. This particular example was sourced from an old time collector along with the tornister pony backpack. A unique and very rare configuration to find!

BACKGROUND
The first helmet covers introduced to the German armed forces were those given in 1937 to the men of the Deutschland Regiment of the recently formed SS-Verfügungstruppe.  On 3 February 1937 a patent was issued to none other than Reichsführer-SS Heinrich Himmler for the production of a reversible cloth cover with both spring and fall pattern camouflage.
The first cloth covers were developed by SS Sturmbahnnführer W. Brandt who was also a Ph.D. in Engineering.  The design was later enhanced by Joahnn Georg Otto Schick of Munich who jointly applied with Himmler to patent the design.  Of interest is the fact that Himmler wanted to own the patent to insure that the German Army could not duplicate the design.  In addition he wanted to ensure that he would become wealthy from the mass production of helmet covers for his growing army of SS men.  The helmet cover was produced in both "oak" and "blurred edge" camouflage cloth of the type only produced for the Waffen-SS.

The first helmet cover pattern included four "rocker clips" that ensured that the cloth cover would remain attached to the helmet shell.  These four clips were positioned on the front, back, and sides of the cloth cover.  This design was changed during actual production to include only three clips.  The forth clip was removed from the design and was replaced by a slip or pocket for the metal visor of the helmet to slide into.  The metal rocker clips were produced in both steel and aluminum painted in black.

First pattern helmet covers did not include loops for attaching foliage. However in 1942 all helmet covers were manufactured to include these cloth attachments on the front, sides, and rear.  Of interest is the fact that many wartime photographs taken after 1942 depict the Waffen-SS with a larger proportion of "first pattern" cloth helmet covers as opposed to those with cloth loops described as "second pattern" covers.