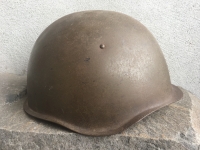 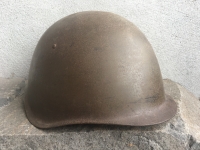 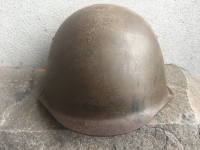 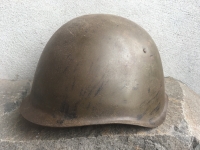 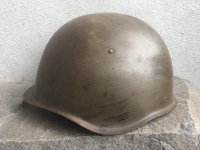 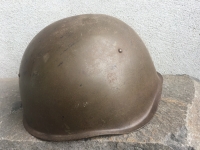 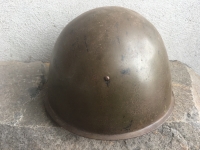 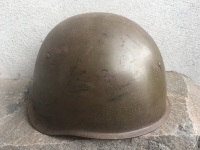 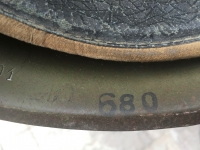 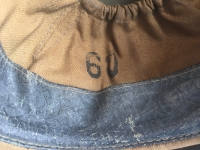 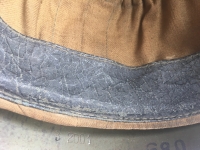 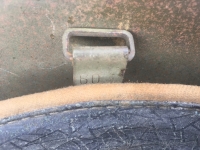 BACKGROUND
The French were the first to have a general issue, "modern", steel helmet in WWI and developed the classic "Adrian" style helmet in early 1915 followed by the British army later that year and by the German’s in 1916. The Russians were given two million "Adrian" helmets by the French as a temporary solution till Russia could begin production of their own helmet. These helmets featured the metal comb protrusion on the top which was meant to help infantrymen battle against saber blows against mounted cavalry units. This sort of rooster comb also allows for air circulation as there is a gap between the base and top of the helmet. In 1916 the Russian also produced their own pattern helmet. In 1936 however the distinctive SSCH-36 (Stalnoi Schlem) model went into production until the SSCH-39, whose shell design was used until 1968. The SSCH-39 was replaced by the SSCH-40, which, although outwardly identical, had a different liner arrangement, and a correspondingly different rivet pattern.

DESCRIPTION
This is a great example of an early war pre-invasion Russian SSCH-39 helmet. After 1939 all Russian helmets basically look the same on the outside and so without any ink production stampings it's rather difficult to tell what year the helmet was made in. In early 1940 all Russian helmets were issued with three finger leather liners similar to what you see with WW1 German helmets. However previous to 1940 the former liner system consisted of a canvass bowl structure with a sort of tough gray tarpaulin reinforcing band. In some ways flipping over an old Russian helmet is a lot like opening an oyster for the first time hoping to find a pearl inside. But instead of a pearl about one in a thousand times you see a nice early war canvass bowl liner system. This way you not only know that the helmet fought in WW2 but also that it was in the early stages of the war from 1939-40.

The outside paint is your textbook Soviet olive green and is the same color both inside and out with only minor rust bleedthrough in some areas. The liner is pretty much as nice as one can hope for and it is stamped size 60 which is actually quite large and wearable to today's head size. Sizes range from 1-4 and this one is marked as a size 3 with ink stampings present but difficult to make out but I do believe I can see the year 1940.