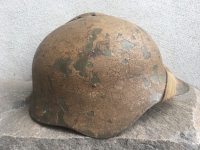 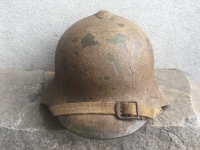 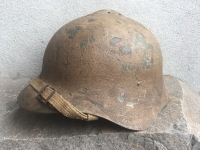 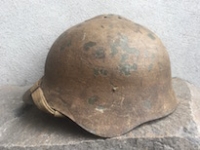 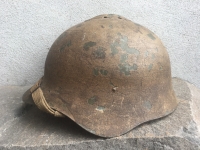 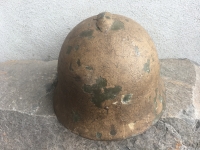 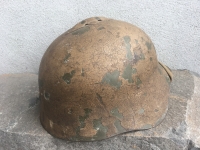 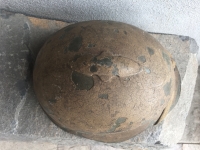 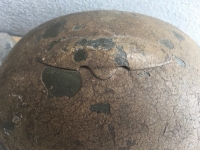 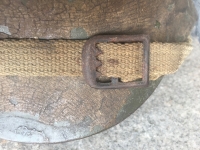 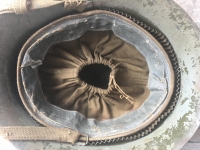 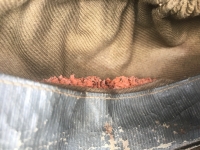 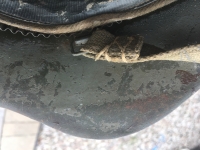 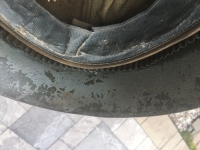 Completely untouched since the end of WW2 with it's original canvass bowl liner system and canvass chinstrap permanently sewn into place into the chinstrap bales.

This rare example is really trying hard to tell us it's story. Here's the narrative that I believe best fits it's overall character. The original owner of this helmet came from California and was an old time collector whose family friend inherited most of his collection. So the last location of this helmet was the west coast. The factory olive green paint is clearly visible on the outside and inside but subsequent additional layers were added during the war. By war I don't mean WW2 I actually mean the war between Russia and Japan in Manchuria in the late 1930's. The Japanese and their small tanks were soundly beaten by Soviet forces all of whom were issued with SSCH-36 helmets. Their were also several naval engagements between both countries which I believe explains the following layers of paint. Inside the helmet you can see distinct factory olive green paint which was painted over in a battleship gray. Although their is a lot of wear of both the original factory green and the battle ship gray one can still make out that the gray paint is overtop of the green paint. On the outside of the helmet you can make out the first layer of factory green paint followed by some hints of battleship gray and then a thick chunky layer of Japanese khaki tan paint.

So here's what I believe happened. The helmet was first issued to a Soviet troop in its standard factory green paint. Once the soldier realized he would be serving on a ship he painted the inside and outside a battleship gray. Then at some point in time during the war he was killed or captured and his helmet was then reused by Japanese forces. At this time the battleship gray paint on the inside was left alone but the outside gray paint was tidely removed most likely by diesel fuel or some other solvent. The helmet was then given a chunky distinctly Japanese khaki tan paint and then reused by Japanese main or support forces.

I have seen Russian helmets painted in this same color before and all of them were SSCH-36's and I believe represent Japanese captured examples much like the Czech and WW2 Russian helmets were often painted dark blue and used by the Wehrmacht for their Luftschultz air raid defense forces.

Perhaps I am completely wrong about everything written above and it was painted this color by the Russian himself fighting in the wheat fields of southern Ukraine against the Germans.

In any event a very difficult example to upgrade and a worthwhile investment considering that the world is mass printing money but these helmets will always be in finite supply.