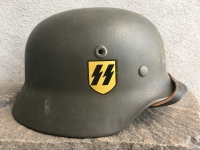 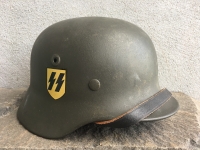 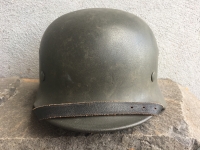 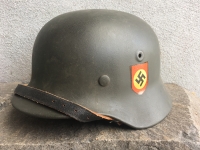 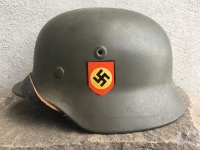 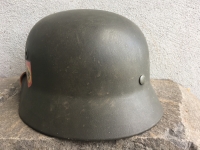 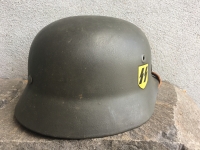 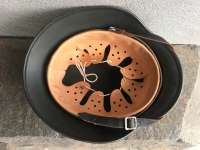 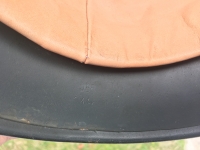 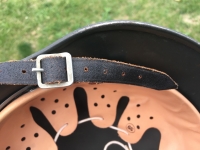 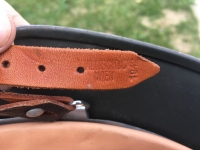 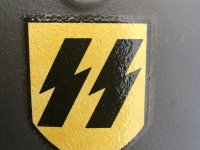 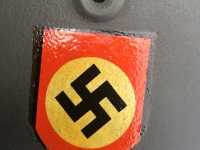 This helmet represents what many collectors like to call the "Holy Grail" helmet as seen here by this double decal M40 Q66 Waffen SS DD (double decal) configuration. For a brief period of around 6 months until the end of 1940 some factories were still in the middle of transitioning from M35 DD double decal helmets to M40 SD single decal helmets. What was supposed to happen was that all newly made M40 helmets should be given only one decal the Heer eagle or Waffen SS however a few of the production lines at the Quist factory in the city of Esslinger for whatever reason didn't get the memo and continued to add both decals to the new M40 helmet shells they were producing. Thereby creating one of the rarest helmets known in the WW2 collector world a double decal Waffen SS M40 Quist helmet. This is an accurate representation of that very helmet.

As I myself am both a collector and history buff I made sure that no detail was spared in this restoration. All with all of my restorations this example was made using an ORIGINAL WW2 produced German helmet shell - a mint Q66 M40 as can be seen by the rear factory stampings Q66 S1882. Firstly I sprayed the inside in smooth dark feld grau enamel paint and then a rough textured spray in that same paint to the outside just as would have been done at the Quist factory. Then I added to highly accurate SS decals. The first being a Quist textbook SS decal whereby the left bottom corner of the left runes slight continues below the shield break line which is only seen in Quist SS helmets. Then I added a nicely aged party shield toned it and then lacquer sealed it with a nice brown glue edge line which is exactly what you often see you in wartime originals.

If you are interested in having something similar created please send me a text or email as I may have similar original M40 shells in stock and can recreate the same example for you.

PLEASE NOTE: Original raw shell prices have risen dramatically since the pandemic and so future pricing will vary depending on my costs at any given time.

This entry was posted in Restored, WAFFEN-SS. Bookmark the permalink.