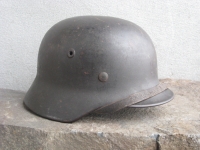 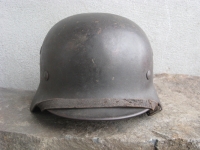 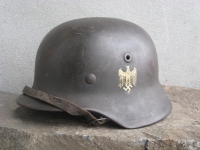 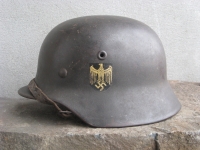 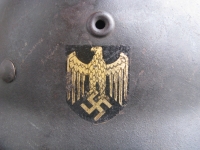 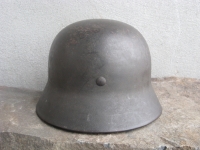 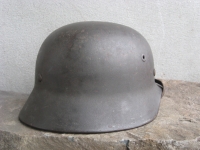 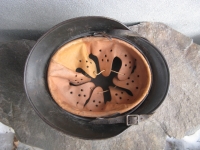 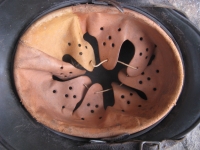 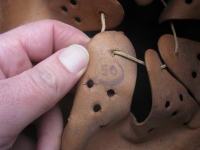 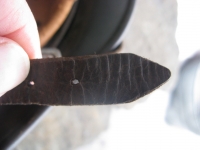 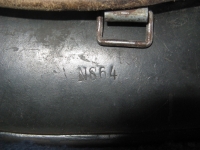 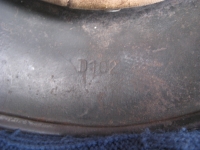 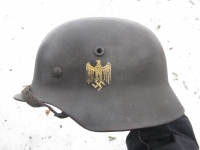 A great all around find as your classic German mid war combat helmet with a nearly complete Heer decal and an anchor to any young collection.  As many of you collectors out there already know M40 SD Heer combat helmets with near mint decals are getting harder and harder to find as most are snatched up and added to personal collections never to be seen or heard from again. What's great about NS decals is that they maintain a nice metallic luster to them and are almost reflective when held in hand unlike most other decal makers at the time.  I also love how the black in the shield is very black with NS decals giving a great contrast between the decal and outside shell.

This SD Heer M40 NS64 was made by the Vereinigte Deutsche Nikelwerke factory in the Germany city of Schwerte with a rear lot number of D102 putting the shell production date firmly in the year 1941 according to Brian Ice's lot data book.  It should also be noted that this same rear lot marking was also documented as "USDOCS" in that same book meaning that it was "A German Helmet Examined By The US Army During a Wartime Study".  So a helmet identical to this one would have been used by the US military for ballistics testing during the war.

The Heer decal would rate very highly in my books at around 95% complete with about the same high percentage of remain field gray textured paint.  In the interests of full disclosure I need to point out that upon a more detailed inspection I later realized that the original liner as in situ was actually dated 1944 and in near mint condition so a little bit too late for an NS64 D102 which should be dated either 1940 or 1941 and it was also a little bit too clean for the overall condition of the outside shell and so I felt very strongly that it was most likely an original liner that may have been replaced post war.  I therefore decided to alternate the liners for a more accurate and earlier war liner dated 1941 with it's original chinstrap still attached so that now both the shell year and liner year are a historical and chronological match.  The 3 split pins are 100% original and are a dead on match to the outside paint.  Without the above aforementioned full disclosure it would have other wise been impossible to detect such changes had been made and so again the helmet as it is now has simply been returned the it's original state.

Over all this helmet has a real pop to it with the typical reflective NS decal giving it that little bit of wow factor as can be seen by the last photo of the helmet in hand!!!