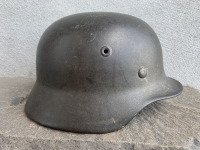 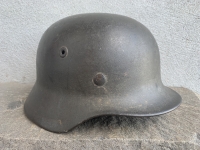 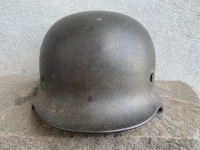 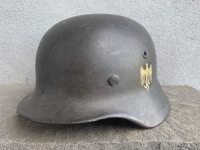 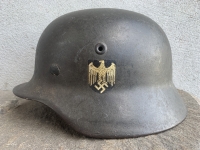 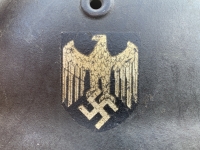 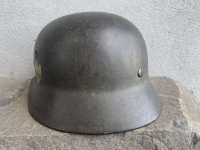 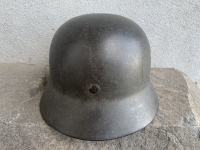 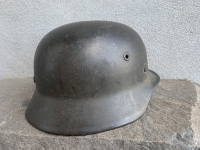 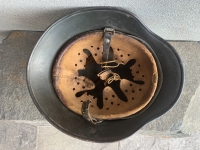 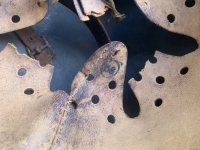 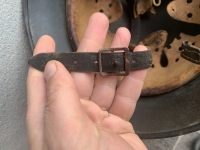 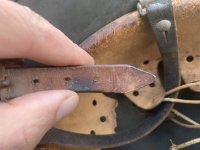 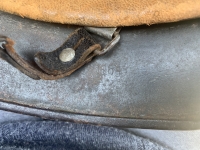 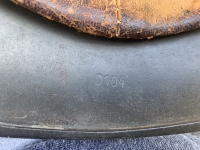 This wonderful mid war example comes from a gentleman who has owned it since 1970. In that year he and his mother went into an antique shop located in Schellsburg, PA on US Rt 30 and bought this helmet for $20 and a civil war bayonet for $15. He has owned both items ever since.

Beautiful untouched example of an every man's fighting helmet that most likely saw action in France, Netherlands or Belgium. The rear lot number D109 gives us it's original factory production date March 1940. The chinstrap is full length and has never been shortened and it marked GXY 41 with the buckle end broken and in need of a small repair. The original liner is also present never having been taken out from the shell with a few of the tongues broken off via dry rot with 2 remaining tethered to the tie cord and could also be reattached and repaired.

The NS Pocher eagle is textbook and about 99% present with a nice smoothly textured finish to the outside paint.

A real fine ubiquitous mid war example and untouched since it was first bought way back in 1970.

CURRENTLY PART OF MY PRIVATE COLLECTION