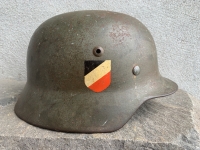 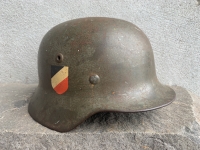 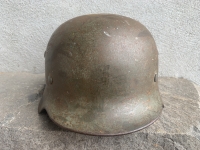 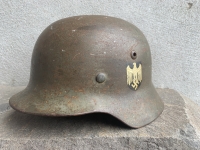 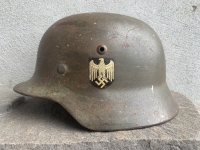 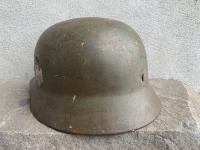 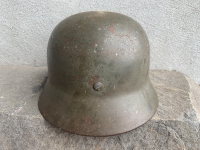 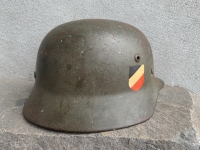 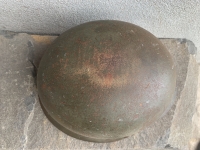 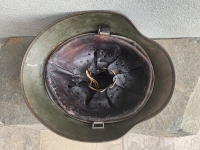 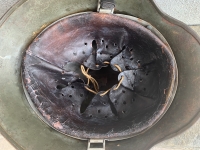 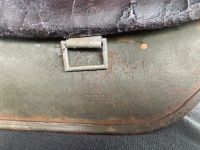 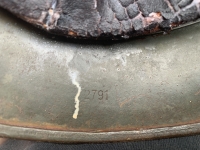 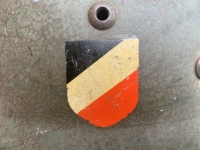 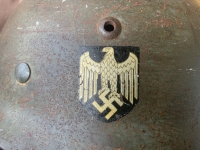 This wonderful pre-war example comes from North Bellmore, NY from a young 30 something gentleman who traded his X-men comic collection back in high school to a classmate for his great uncle's WW2 souvenir. Just two kids on the playground swapping out comics for a piece of history.

The overall condition of the helmet is in medium grade which in itself is remarkable given the age of this thing. Not only is this your early pre-war M35 with a non-reenforced aluminum square bale liner system and gothic "ET66" font script but based on the rear lot number of 2791 the helmet dates way back to the very beginning of M35 production and to the later months of 1935!!! I know this helmet is from 1935 not only because of it's rear lot number but also because under the power of a quality flashlight I can clearly make out the stamping on the side wall of the aluminum band which reads "D.R.P. Schubeth-Werk Braunschweig 1935". At this point in time the model 1935 at the beginning of that same year was still being developed jointly by government engineers and technicians within the steel factory of Eisenhuttenwerke in Thale. Trials were concluded during the summer of 1935 and the first helmet supply contracts awarded in the fall of that same year.

So as far as double decal Heer M35 helmets this is among the very first batches ever created in the very first year of production as no other factory (SE, Q and NS) were producing helmets until 1936.

Just makes a collector's heart pitter patter seeing an untouched "survivor" like this one with all of it's original smooth dark pea green paint both inside and outside, original non-reenforced aluminum liner system and perhaps the best aspect are the very well preserved national tri-color shield and adler/eagle decals. The ET eagle is textbook and was only used in 1935 and part of 1936 with a unique un-breaking curve of the upper wing detail line of the left wing which remains uninterrupted until the very tip. Later versions of the ET eagle had even wing tip lines and a classic print dot error over the center of the far right toe on the right talon.

I suspect that the original owner of this helmet may have used some mink oil to preserve the leather which has caused it to darken over time.