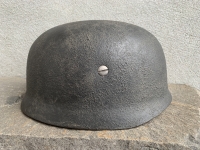 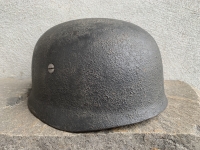 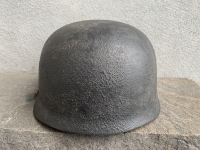 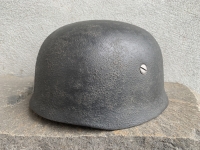 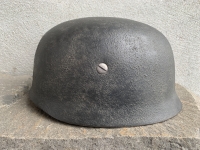 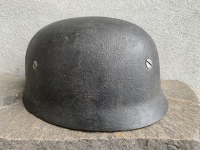 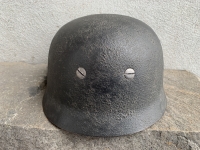 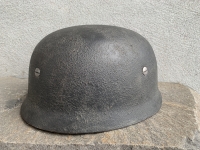 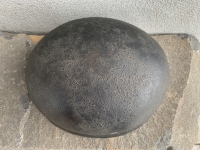 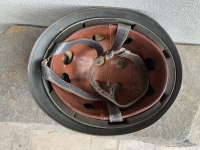 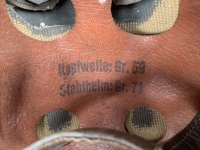 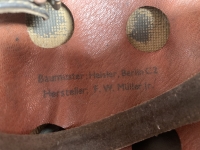 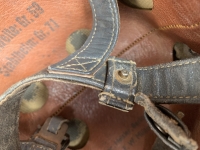 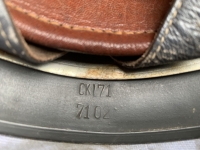 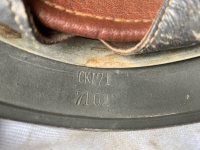 PHYSICAL DESCRIPTION
This German WW2 paratrooper helmet comes from a collection of roughly a dozen recently acquired from the surviving wife of an old time collector out of southern California. I ended up buying 6 of them from his estate with the remaining being distributed to other family members. All I could find out from a friend of the family was that the original owner had a metal fabrication shop and so may have known a thing or two about helmet shell construction because all of these para trooper helmets are dead on exact in terms of their overall shape and even weight almost down to the ounce.

Unlike with all of those cheap Chinese and Pakistani knockoffs we see now completely flooding the marketplace with abrupt upward sloping edges and weighing only about half the weight that they should. These 6 helmets now on the site are so close to the real thing that they would fool even an advanced collector from 3 feet away. While I'm not certain if he in fact made these helmets himself or had them made elsewhere I can say that they are the best post war created German paratrooper helmets I have ever had the fortune of handling.

When you compare the side profile of these helmets to any of the 5 untouched originals in my own personal collection one can literally not make out any differences, even minor ones. The slope as you move towards the front of the brim gently rises at a precise gradient which exactly mirrors all known originals. The weight is also nearly exact to my originals in my private collection. I have weighed 3 of my original ET71's with original liners, chinstraps and these 6 are actually a tiny bit heavier than even my originals differing only by about 90 grams or roughly 3 ounces. A kit-kat bar only weighs about 60 grams and so that's pretty damn close!

The only way to really tell that these are post war created is that the CKL71 and rear lot number fonts are a tad bit off but still very slender and elegant and so meant to fool. Also the liners are very well aged and darkened perfectly even featuring that nice shiny upper edge wear you see from actual head sweat buffing the front and rear.

This particular example has been professionally restored (not by me) into a simple dark slate gray textured camo finish with with smooth blue gray enamel paint on the inside. A nice large and wearable size CKL71 with rear lot number 7102. Even the outer aluminum liner band is highly aged and oxidized making me believe that these helmets were not meant for re-enactors but rather as museum copies or an attempt to fool the general public. Perhaps the original owner even thought he had the real deal?

In all my years of collecting I have never seen a more finely made replica of an original German paratrooper helmet and once these are sold I doubt I will ever find anything like these ever again. This helmet definitely represents a very small vintage batch produced many decades ago by someone who knew what he was doing and when original examples were more common/affordable and thus easy to study.

This entry was posted in LUFTWAFFE, Restored. Bookmark the permalink.